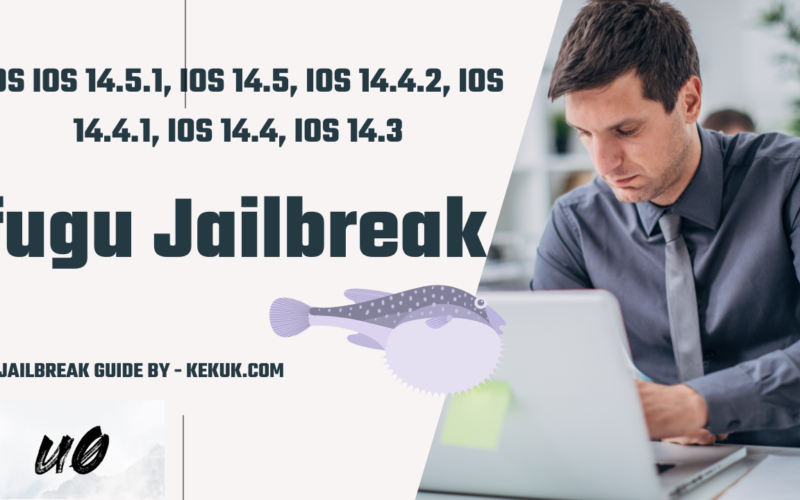 The checkm8 exploit is used in the Fugu jailbreak, which is an open-source untethered jailbreak. Linus Henze, a security researcher from Koblenz, Germany, created it. Unc0ver Jailbreak was also used by Fugu14.

Fugu14 can be downloaded here.

Despite the fact that Fugu14 was made public, it is still in the development stage. The Fugu14 is difficult to use. To set up the Fugu 14, you must first download and install the following programs.

Note: When side-loading an unc0ver jailbreak app via the AltStore v1.4.8, Fugu14 will be loaded automatically.

Step 3 – From the prompt message, tap “trust and open.” Now open the Xcode project in a new window.

Step 04 – Connect the iPhone to the PC in the meanwhile. Navigate to fugu14app > Targets> Signing & Capabilities > Team in the fugu14app menu. If you don’t have an Apple ID, go to Add An Account and follow the on-screen instructions.

Step 05 – If an error warning appears, hit bundle Identifier and enter some random text. It will correct the problem.

Step 06 – Closing the Xcode window. Go to the Fugu14-master folder once more. Locate and run the ‘ios install.py’ script. To adjust the file path, type cd and drag the fugu 14 master folder into the terminal window.

Step 07: Press the Enter key. The terminal window will display a message saying “Welcome to the Fugu14 iOS installer.”

Step 08 – In the terminal window, double-check that you have all of the criteria specified. Tap enter to proceed, especially if you have an iproxy and an iDevice installation.

Step 9 – It will inquire about several facts. “Do you wish to develop a jailbreak?” is accessed by pressing Y.

Step 11 – It will be creating the jailbreak at the moment, so keep an eye out for the message BUILD SUCCEEDED.

Step 12 – Change the extension of the downloaded ipsw file to.zip. Then take it out. From the extracted folder, find the largest dmg file. To mount the file, simply double-click it.

Step 13 – Open the terminal window once more. Type the dmg file’s section. It’s possible that you’ll get a “mount path not valid” error. If this is the case, delete the slashes before pressing enter. It will display the IPA that has been produced.

Step 14 – Verify that your iPhone is connected to your Mac. To proceed, press enter, and Fugu14 will begin the sideloading procedure on your iPhone. Fugu14 will display a notification about an untrustworthy developer. Go to Settings > General > Device Management to manage your devices. You can observe Apple’s development there, and you may trust the app by tapping it. Fugu14 is about to start.

Step 15 – Select the ‘Setup Fugu14’ option. Return to the terminal window once the process on the iPhone has been completed. Enter the code. The message ‘Open the Fugu14App again and follow the on-screen instructions!’ will appear.

Step 16: From the iPhone, reopen Fugu14 n. Proceed as directed by the on-screen directions.

Step 17 – Open the Terminal Window once more. Run the commands below in a new terminal window.

Step 18 – In the terminal windows, type bash to see whether it works.

You did an excellent job! You’ve now completed the Fugu setup.

Fugu is compatible with iOS 14.6 and later.

More information can be found on the following sites.

Uncover the truth with Fugu14.

The most essential thing is that Unc0ver v7.0.0 introduced support for the iOS 14.4 – iOS 14.5.1 jailbreak for A12-A14 smartphones via Fugu14 when Fugu 14 was published. Pwn20wnd created it for the iOS 11 – iOS 14.3 jailbreak. In its nature, the Unc0ver jailbreak is a semi-untethered jailbreak. However, if you have a Fugu14 untether-compatible device, you can use Fugu 14 to untether your unc0ver jailbreak.

How to use the unc0ver jailbreak to install the Fugu14 untether

You must manually configure fugu with unc0ver v7.0.0.

However, Unc0ver v7.0.1, v7.0.2 have now fixed a large number of problems. As a result, you may now install Fugu14 automatically while side-loading an unc0ver jailbreak software via the AltStore v1.4.8.

When you install the Unc0ver from the AltStore, you’ll see a notification that says “jailbreak needs untethering.” Click that to untether. If you don’t want to untether, you can choose to install without it.

Taurine is a semi-untethered jailbreak tool developed by CoolStar for iOS 14 – iOS 14.3. On his Discord channel, the developer hinted at a Taurine update for the Fugu14 release.

The Taurine jailbreak page has more information about Taurine.

Zeon – Zeon is a repo extractor for jailbroken iOS devices. You may use zeon to install jailbreak apps on all iOS 14 – iOS 15.4 devices. It’s a simple online method that you can install on your smartphone. It can be used as a Fugu substitute.

Fugu Jailbreak – Checkra1n does not work with iPhone X or previous smartphones. As a result, you can use Checkra1n as an alternative for these iOS 14 – iOS 14.8.1 jailbroken devices. Checkra1n uses the Checkm8 exploit as well. It’s a semi-tethered computer-based jailbreak.

Linus previously released the fugu jailbreak for iOS 13 (version 13.5.1). Two years ago, Fugu was the first open-source jailbreak program based on the checkm8 exploit. For the time being, the iPhone 7 is the only device that is officially supported. This is likewise in development mode and is exclusively for developers to use.

However, at that time it was not popular because there were a lot of jailbreaks available for these versions. Find iOS 13 – iOS 13.5.1 Jailbreak from here.