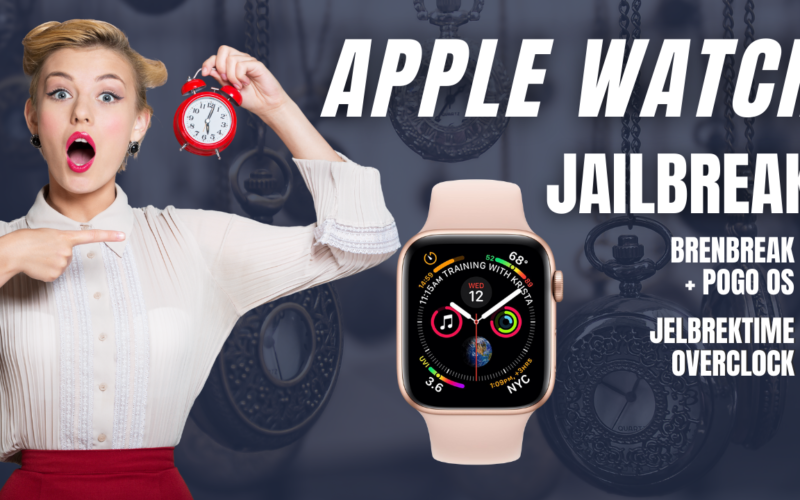 On this page, we’ll talk about the Apple Watch jailbreak and other Apple Watch-related topics.

When compared to other Apple gadgets, such as the iPhone, iPad, and iPod, Apple Watch jailbreaks are quite uncommon.

When you jailbreak your iPhone, iPad, or iPod, it installs the Cydia app store, which is more customizable than the official App Store.

Popular jailbreak tools for these devices were Checkra1n, Taurine, Unc0ver, and Odyssey. If you jailbreak the Apple Watch, you’ll be able to use lack of features as well.

The difficulty of downgrading Apple Watch firmware is one of the reasons for the lack of a jailbreak for the Apple Watch.

Apple’s firmware is known as watchOS.

The following links may be useful if you’re looking for information on other iOS versions.

A future jailbreak for the Apple Watch is the Brenbreak jailbreak for watchOS 4.0 – watchOS 5.1.2. Work is now underway, according to the developer, and will be completed in two weeks, with frequent updates available on his website.

Last April, Ethanpepro announced an iWatch jailbreak for watchOS 4.1 to 5.1.2. But we didn’t hear anything else about the Brenbreak Apple Watch jailbreak after that.

Other skilled developers can add support for watchOS 3. x and 4.0 running earlier Apple Watch models by changing this project.

according to the developer, JelbrekTime has the following features.

If you’re a developer, you can get access to tihmstar’s GitHub repository to install jelbrekTime.

A knowledgeable developer could jailbreak watchOS 4 by changing the above jelbrekTime.

OverClock is the most recent watchOS 3 jailbreak project. It was created by Ben Sparkes, the same person that gave us the Meridian Jailbreak for iOS 10. X. This Apple Watch jailbreak program uses the v0rtex exploit to gain root access. This strategy is very similar to the one demonstrated by Max Bazaliy at DEF CON 2017.

This is still in the early stages of development, so Ben Sparkes uploaded it to GitHub as an XCode project to encourage participation.

Important: Although an IPA has not yet been released, if you are a developer, you can get the essential files from Github. The official website can be found here.

The following functions, according to the developer, need to be developed. These features will be included in future OverCl0ck Jailbreak tool versions.

On the 27th–30th of July 2017, hacker Max Bazaliy showed the jailbreak for watchOS 3 at DEFCON, the world’s largest hacker convention. He has targeted access to the following sensitive information during the presentation.

However, this was a private jailbreak, and he made no mention of a public release.

WatchOS 2 & Minor Versions Jailbreak
Following that, some excellent news for the jailbreak of watchOS 2.

The iWatch jailbreak has been confirmed by Steve T-S.

Steve Troughton-Smith (Irish Apple software programmer), Saurik (Cydia developer), and Adam Bell (Canadian Apple watch software developer) were able to hack Apple Watch and run UIKit and SceneKit apps on the device. The following is a video that has been proven.

Jailbreak of Hamze Sood
Hamze Sood, another developer, was able to run Flappy Bird on Watch OS 2, and users can control it by touching and managing the Crown.

Comex’s Web Browsing
The Apple Watch does not include a Safari web browser, and it will not be added in the future due to the tiny display resolution. Users, on the other hand, are eager to have it. As a result, jailbreaking is the only way to achieve it. Comex, as expected, launched the Web browser, allowing him to run the Google Home page and the Copy/Define option on the watch display. Comex online browsing was confirmed by a Twitter image and video.

Why should you jailbreak your iWatch?

The iWatch (Apple Watch) was released missing some of the most important features, such as Web browsing. Apple also restricts the availability of particular watch face designs to specific Apple Watch models.

As the most popular 3rd party software store for jailbroken devices, Cydia offers a wide range of third-party apps for customizing iOS devices. As a result, jailbreaking is the only way to add those missing features to your iWatch as jailbreak tweaks.

The reasons for the iWatch jailbreak are as follows:

Before unveiling the iWatch, Alexander Zaytsev unveiled numerous fresh faces at the WWDC keynote speech. When the iWatch was first released, Apple released a few faces, some of which were rejected. Alexander Zaytsev will introduce additional new looks after the jailbreak method is proven, and then we will be able to use all of them.

Plearns has designed a number of different faces to monitor the interface. Basketball face was one of the first smart looks he created. Users will be able to use his entire face once the iWatch jailbreak is released.

This is another face that contributes to Alexander’s creation. He has made time-telling apps and skins for the Apple Watch. Unfortunately, we won’t be able to use anything because there isn’t a jailbreak way for the iWatch.

Mackenthun is a developer of jailbreak apps for Apple devices. He’s made a lot of apps and wallpapers for third-party app installations.

This is an upcoming jailbreak custom face that is rather lovely. We’re not sure why Apple didn’t put this face in the default selection. All iWatch users, on the other hand, will be fortunate to be able to install it following the jailbreak.

This is a really unique watch face that shows past and current running speeds. This is designed specifically for athletes, although it may be used by everyone.

This face allows users to personalize the watch face according to their preferences, including adding their own image. Other people’s faces are immutable. This face will be the most popular among users due to its flexibility to be customized.

This is a very appealing face with a pleasing color scheme. It shows the current time and weather forecast for your location. This will be the most popular custom face among users as a result of these qualities.

It has a beautiful 3D appearance. The best thing is that customers can listen to music directly from this face. Users need merely hold and touch the face, after which it will invite you to stream music. This will be well-known among music fans.

One of Israel’s developers produced this face. This iWatch face has a relatively simple design when compared to other iWatch faces. It will be popular just because it has a design.